A netlabel, also called online label, web label or MP3 label, distributes its music in digital audio formats (mainly MP3 or Ogg) online. Netlabels often work like traditional record labels to produce and promote music projects (such as albums or compilations). Most employ guerrilla marketing to promote their work. Few netlabels earn money for participants. The primary difference between netlabels and record labels is that netlabels emphasize free downloads, as opposed to physical publishing (CD, vinyl or DVD). Often, the music is released under licenses that encourage sharing, such as the Creative Commons Licenses. Artists typically retain the copyright.
From Wikipedia, the free encyclopedia

... is a collective running an autonomous cultural center in Pula, Croatia. Monteparadiso was born in 1992 in a squatted fort in Pula, Croatia. We were mostly into punk/hardcore concerts and similar things. From then on we have a punk/hc fest every summer which gathers people from all over Europe.

In 1997 we registered an NGO and in 1999 we moved to an abandoned barracks where we got 100 m2, but then squatted additional 400m2. There we have few rehersal rooms for bands, recording studio, presentation room, concert place, kitchen, hacklab (based only on GNU/Linux) with free internet access, diy cinema, sleeping space, etc.

At the moment we are working on a city-wide free wireless network and we are also building a community radio station... 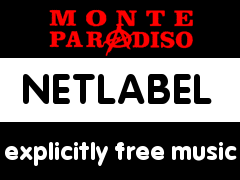